Where are the best places to shop in Berlin? Which restaurants should not be missed while being in Berlin? The Concierge Team at Waldorf Astoria Berlin are able to advise guests on restaurants, night life, sporting and theater events, sightseeing tours and shopping among other things to make your stay memorable. Each of them is a member of Les Clefs d’Or. To become a member of this prestigious organization, concierges must demonstrate substantial professional experience. Our Les Clefs d’Or concierges have their fingers on the pulses of vibrant Berlin. They are able to direct you to any location or product at any time of day or night to provide excellent service to provide you a unique stay and an unforgettable experience. 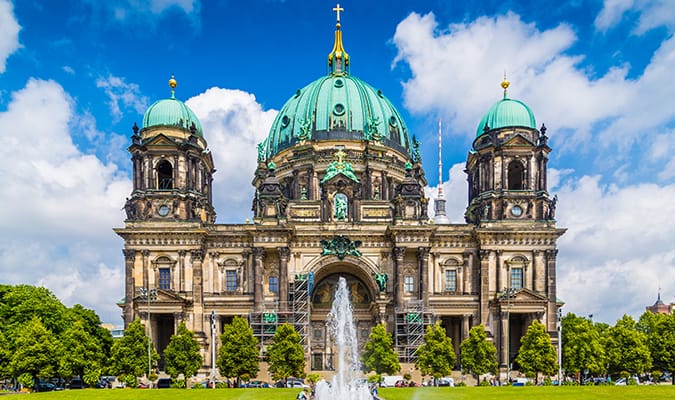 Book one of our unique once-in-a-lifetime experiences, which are available exclusively to guests of Waldorf Astoria Berlin, from luxury cruises to private visits to the zoo by night. Available from April till October. 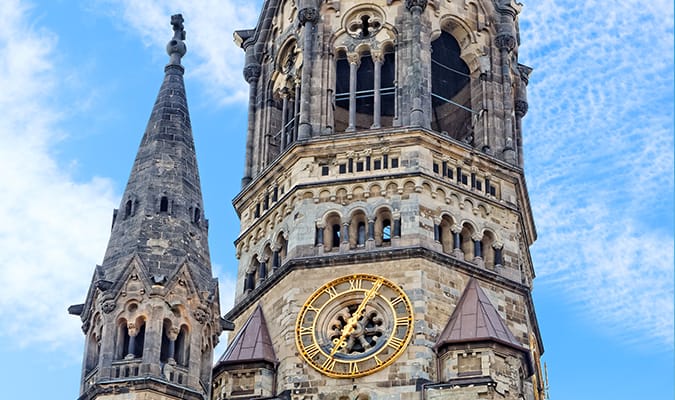 Check out this walking tour of local Berlin attractions, starting at the hotel and making your way east past the Zoo, Victory Column, the Holocaust Memorial and Checkpoint Charlie before returning to the hotel. 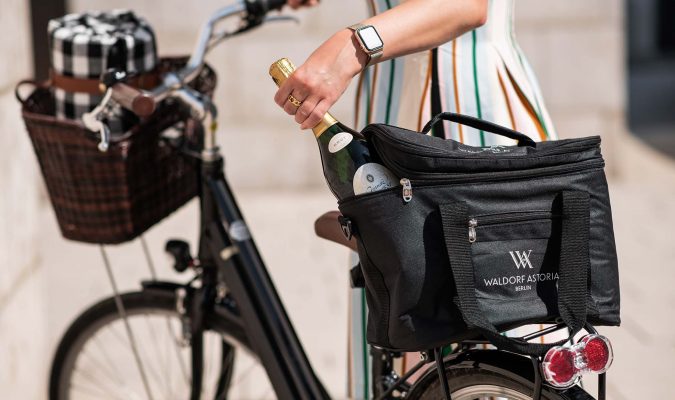 Picnic in the park at Waldorf Astoria Berlin

Enjoy a special outdoor experience by bike with our Picnic at one of any of iconic Berlin parks! The experience for two includes Bike rent (up to 6 hours), a Picnic basket, with a fine selection of sandwich or wrap, cupcakes or éclairs and a bottle of bubbly Crémant. Coordinate your own travel to and from the park – booking one day in advance: expected to be available.

Choose from our selection of unique once-in-a-lifetime experiences, which are available exclusively to guests of Waldorf Astoria Berlin, from luxury cruises to private visits to the zoo by night. 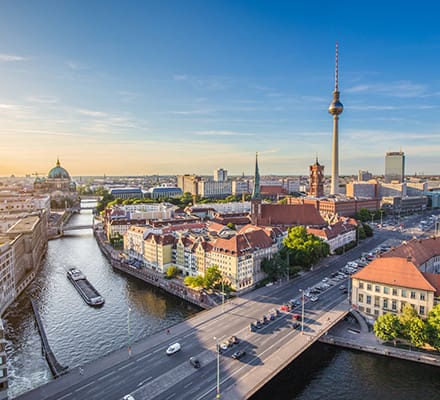 Experience the beauty of Berlin with a private cruise along the scenic River Spree and its Canals as it winds it way through the heart of the German capital with sensational skyline views. Available from May to October. 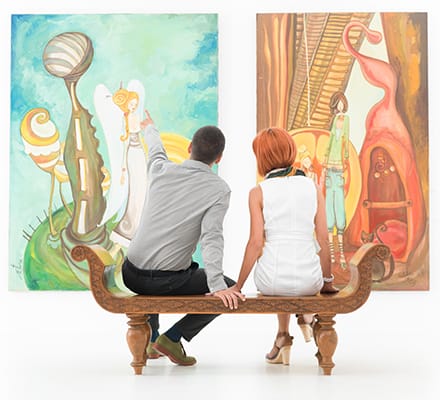 A customized art gallery tour with your own private expert guide. Spend a whole day visiting three galleries, adapted to your own taste in art. 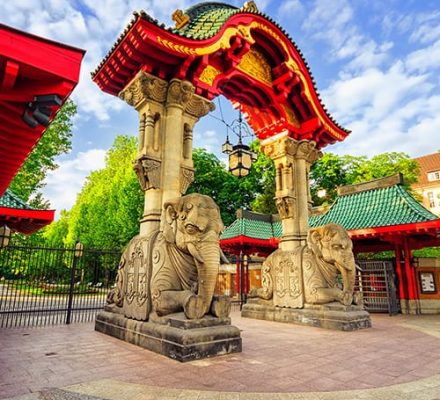 Take an exclusive, after-hours tour of the oldest zoo in the world, home to the world’s largest variety of species: elephants, giraffes, gorillas, and Germany’s only giant pandas. 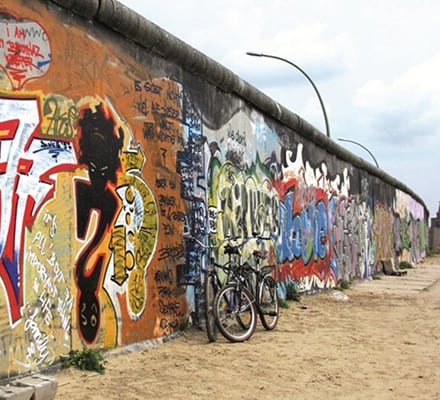 It’s been more than 25 years since the Berlin Wall fell, but one Cold War icon is still chugging away—the Trabant. Gain a unique insight into the past while driving the iconic cardboard “Trabi”. Just pass through our Lobby, get into your very own Trabant and chug away through Berlin in convoy. 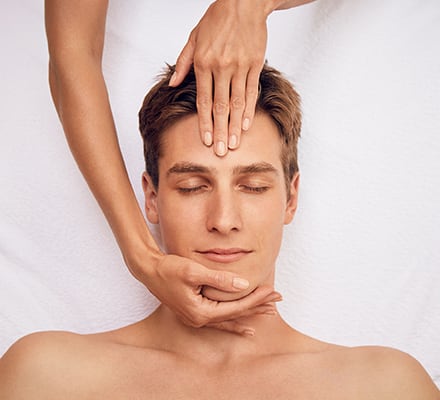 Detach from your devices and focus on social interaction in the physical world. Digital Detox is your digital wellness escape at Waldorf Astoria Berlin, designed to ease the stress and strain resulting from the frequent use of digital devices.

Discover the city on foot with our recommended walking tour of local Berlin attractions, starting at the hotel and making your way east past the Zoo, Victory Column, the Holocaust Memorial and Checkpoint Charlie before returning to the hotel.

Set out from Waldorf Astoria Berlin and begin your walking tour of the city, equipped with a map and expert local knowledge, provided by our Concierge, should you need it. 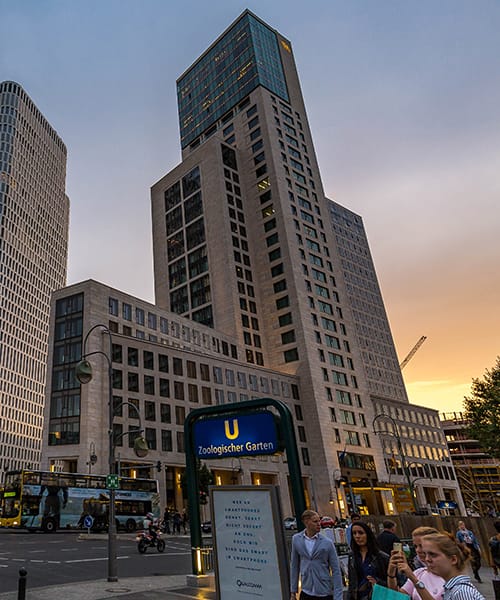 Your first stop is Berlin Zoo. Germany’s oldest zoo features almost 20,000 animals and the world’s largest diversity of species. Highlights include a hippo enclosure with an underwater viewing area, Germany’s only pandas, and penguin world.

The zoo is open 365 days a year and you can purchase tickets to the zoo from the Concierge ahead of your visit. We can also help you plan your visit with information on animal feeding times. 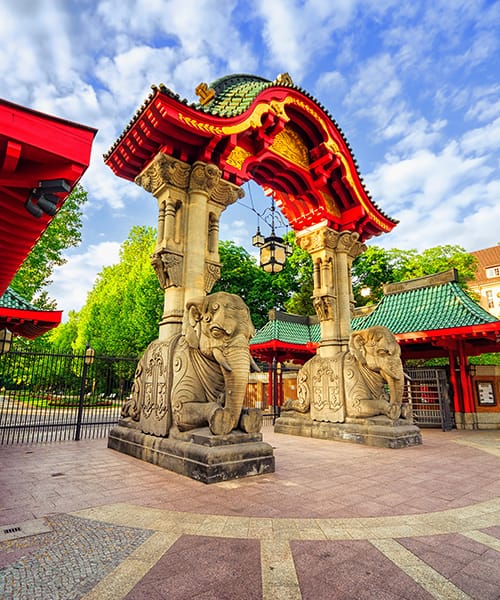 After visiting the zoo, this little cafe and beer garden in the Tiergarten park is the perfect place to stop for a drink or a bit to eat. If the weather is warm, you’ll find plenty of outdoor seating among the trees with views of the lake.

Enjoy homemade pretzels, meatloaf or a crispy stone-oven pizza and sourdough bread from the borchardt bakery, as well as a range of local, Bavarian and Italian beers. 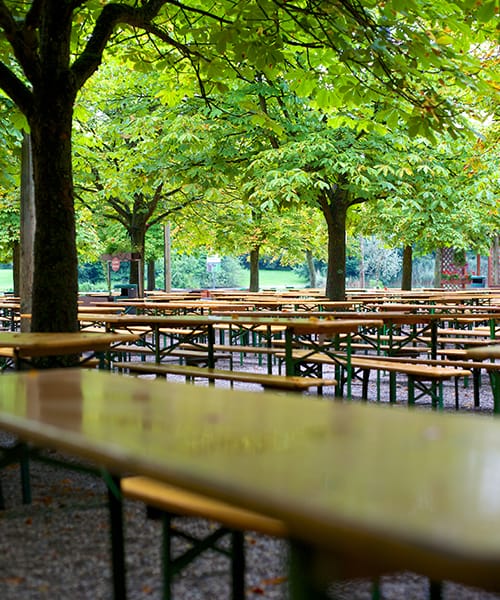 One of Berlin’s most famous landmark’s, the Victory Column stands proudly in the center of the Tiergarten park. The monument was first built as a symbol of Prussian military victory in the 19th-century Franco-German war and is now a favorite spot for tourists.

The golden statue at the top of the column featured in a U2 music video, and former US president, Barack Obama delivered a speech to 20,000 Berliners in front of the monument in 2008. 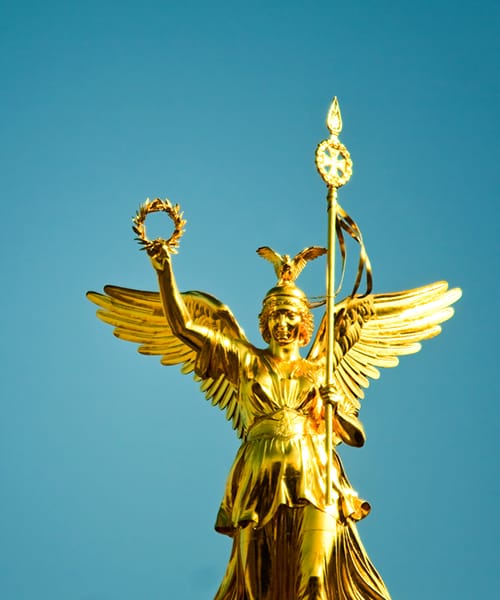 From the outside, the DZ Bank Building doesn’t give much away. Inside though, the spectacular glass atrium is a trademark design of renowned architect Frank Gehry.

The atrium features a glass, airship-like roof illuminated by dramatic lighting and a conference room wrapped in a shell of morphing titanium. The multi-use building opened in 2000 and includes commercial and residential spaces. 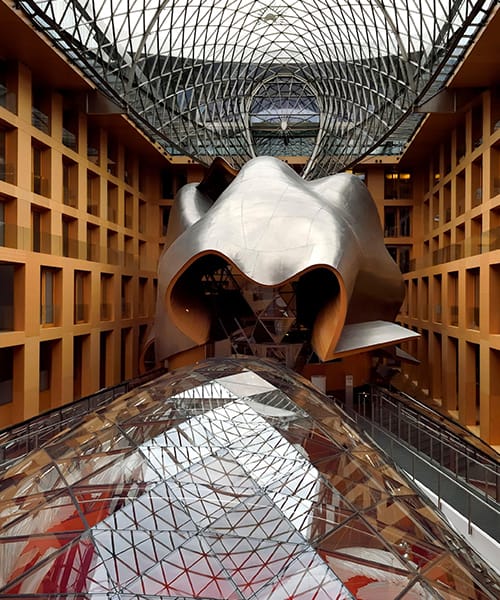 Memorial to the Murdered Jews of Europe

Designed by architect Peter Eisenman and engineer Buro Happold, the Memorial to the Murdered Jews of Europe is a monument honoring the millions of Jews who died at the hands of the Nazis during the Holocaust.

A place of remembrance and contemplation, the monument was ceremonially opened in 2005 and is comprised of 2,711 concrete slabs covering an area of 19,000m2 with an underground information center. 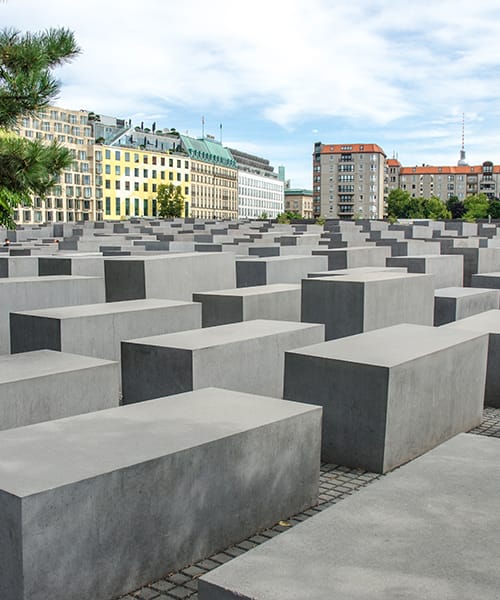 Located on the corner of Friedrichstraße and Zimmerstraße, Checkpoint Charlie is a former border crossing between East and West Berlin during the Cold War (1947 – 1991).

The name Checkpoint Charlie is derived from the NATO phonetic alphabet (Alpha, Bravo, Charlie) – this being the third checkpoint opened by Allies in Berlin. It became the most famous crossing point during the cold war and was the only gateway where East Germany allowed Allied diplomats, military personnel and foreign tourists to pass into Soviet Berlin. 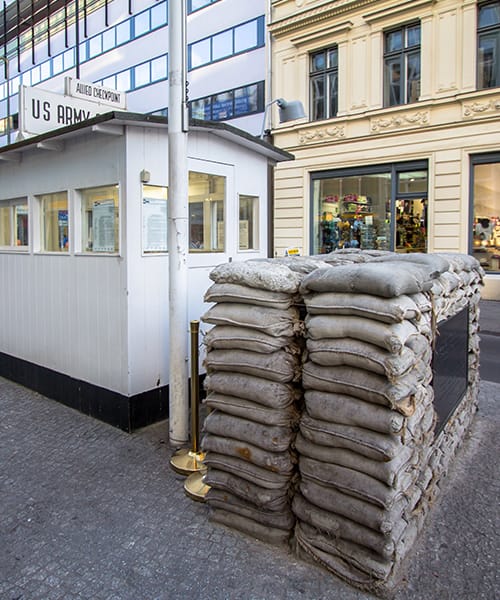 Preserving one of the last remaining sections of the division wall between East and West Berlin, the Berlin Wall Memorial provides a unique insight into Germany’s past.

As well as a 70-meter stretch of the original Berlin Wall, the memorial includes an open-air exhibition featuring historical audio, materials and pictures, a visitors’ center and an observation tower. 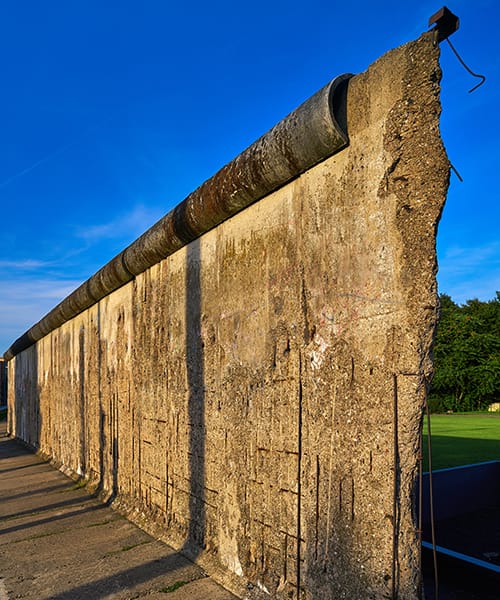 Designed by architect Helmu Jahn, the Sony Center is a dramatic steel-and-glass dominated ensemble of seven individual buildings, housing offices, apartments, cinemas, restaurants, and the Sony European Headquarters. In its central plaza, which sits below a tent-like canopy roof, tourists and locals meet and mingle. 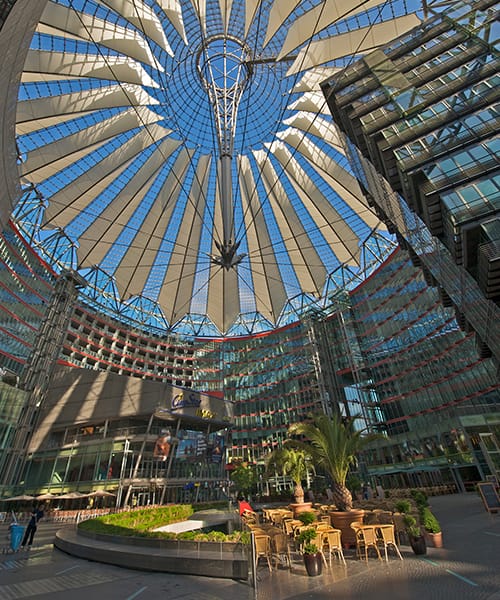 The last stop on the tour takes you to the German Resistance Memorial Center, which commemorates the courageous people who gave their lives to bring down the Nazi dictatorship.

Explore the Benderblock, which was the site of Colonel Claus Schenk Graf von Stauffenberg’s attempted coup on Adolf Hitler’s regime, and discover many other stories of heroic resistance.

Return to the Hotel

After exploring the best of Berlin, return to Waldorf Astoria Berlin where we will be happy to offer you refreshments and a delicious meal in ROCA Restaurant, or spa treatments in Waldorf Astoria Spa.

Your request. Our pleasure. Live unforgettable. 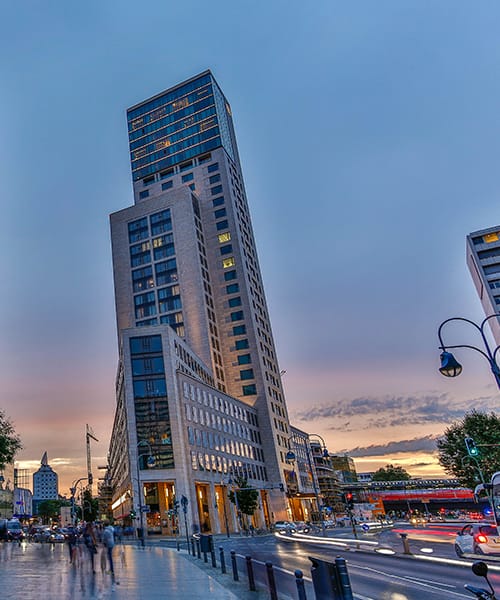